Department of Neuropsychopharmacology and Hospital Pharmacy

I. Certification Board for Diabetes Educators in Japan (CBDEJ)

The brain controls all body activities, ranging from heart rate to memory. Each brain function is operated by particular neural circuits made by synapses. The most important feature of synapses is the activity-dependent plasticity. The long-term objective in our laboratory is twofold. One is to define the molecular and cellular mechanisms that regulate synaptic plasticity associated with learning and memory. In particular, we are interested in molecular and cellular mechanisms that are responsible for working/short-term memory and reference/long-term memory. The other is to define the pathogenesis/pathophysiology of neuropsychiatric brain disorders, including Alzheimer's disease, schizophrenia and drug addiction. Our current efforts have been focused on the following projects.

Both genetic and environmental factors play a role in the pathology of schizophrenia. Recently, genetic susceptibility factors for the disorder have become available, which include neuregulin-1, dysbindin, and disrupted-in-schizophrenia 1 (DISC1). Epidemiological studies have identified environmental factors for schizophrenia, and maternal viral infection during pregnancy is regarded as the most promising one. Viral infection in the second trimester of pregnancy in humans increases the risk of subsequently developing schizophrenia in adolescence/adulthood. A possible interaction between environmental and genetic susceptibility factors, especially during neurodevelopment, is proposed for the disease etiology. 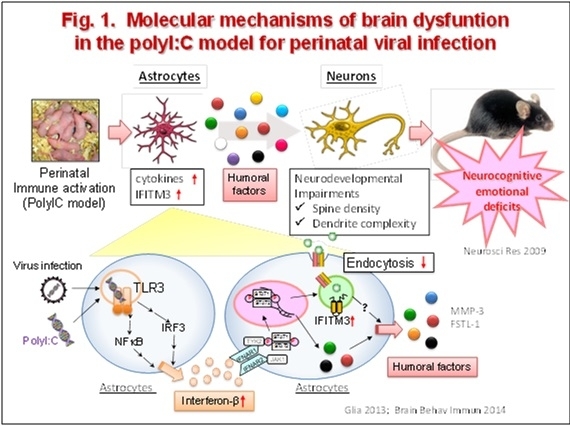 We focus on phenotypic analyses at behavioral, neurochemical and neuroanatomical levels in mice with mutant schizophrenia susceptibility genes such as DISC1. We also study a possible interaction of genetic and environmental factors in schizophrenia by using a genetically-engineered mouse models under exposure to the synthetic double strand RNA polyriboinosinic-polyribocytidilic acid [polyI:C, a toll-like receptor 3 (TLR3) ligand that induces strong innate immune response]. PolyI:C has been used to mimic a viral infection during neurodevelopment for modeling schizophrenia in mice (Fig. 1).

Drug addiction/dependence is defined as a chronically relapsing disorder that is characterized by compulsive drug taking, inability to limit intake, and intense drug cravings. The positive reinforcing/rewarding effects of drugs primarily depend on the mesocorticolimbic dopamine system innervating the nucleus accumbens while the craving for drugs is associated with activation of the prefrontal cortex. The chronic intake of drugs causes homeostatic molecular and functional changes in synapses, which may be critically associated with the development of drug dependence. We have demonstrated that various cytokines such as TNF-β and GDNF 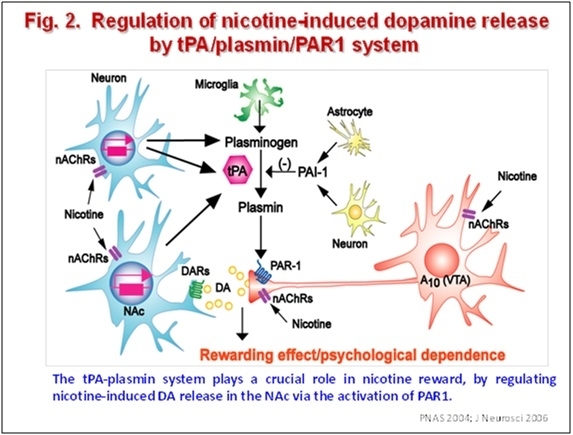 and proteinases such as tissue plasminogen activator (tPA) and matrix metalloproteinase (MMP-2/MMP-9) are produced in the brain on treatment with drugs of abuse, and play a role in drug dependence. These endogenous modulators of drug dependence are classified into two groups, pro-addictive and anti-addictive factors. We have proposed that an imbalance between pro-addictive and anti-addictive factors contributes to the development and relapse of drug dependence. Targeting these endogenous modulators would provide new therapeutic approaches to the treatment of drug dependence (Fig. 2).
Decision-making is a key activity of everyday life. Consequently, disturbances in the ability to make appropriate decisions or anticipate their possible consequences can result in massive social, medical, and financial problems. Patients suffering from neuropsychiatric disorders such as substance-related and addictive disorders have impairments in decision-making, which may be associated with their behavioral abnormalities. However, the neuronal mechanisms underlying such impairments are largely unknown. Using an originally developed gambling test for rodents, we demonstrated that methamphetamine (METH)-dependent rats choose a high-risk/high-reward option more frequently, and assign higher subjective value to high returns, than control rats, suggesting that decision-making is impaired in the drug-dependent animals. We seek to clarify the underlying neural mechanism for the impairment of decision-making in methamphetamine-dependent rats.

(2)Alzheimer's disease and other neurodegenerative disorders

Alzheimer's disease (AD) is a progressive neurodegenerative process characterized by senile plaques, neurofibrillary tangles and neuronal loss. A pathologic hallmark of AD is deposition of amyloid-β peptide (Aβ), a 39-43-amino acid peptide derived from the transmembrane amyloid precursor protein (APP). Fibrillar Aβ deposits are found in extracellular senile plaque cores and are associated with neurodegeneration in later stages of AD. We study the mechanisms underlying the Aβ-induced neurotoxicity in vivo, by directly injecting Aβ into the lateral ventricle. We have already discovered novel compounds to prevent the Aβ-induced neurotoxicity.
Seizures cause brain injury via a number of mechanisms, potentially contributing to neurologic and cognitive deficits in epilepsy patients. Although seizures induce neuronal death in some situations, they also can produce nonlethal pathophysiologic effects on neuronal structures and functions. Kindling is an experimental epilepsy model in which repeated electrical or chemical stimulation of certain forebrain structures triggers progressively more intense electroencephalographic and behavioral seizure activity. Once established, 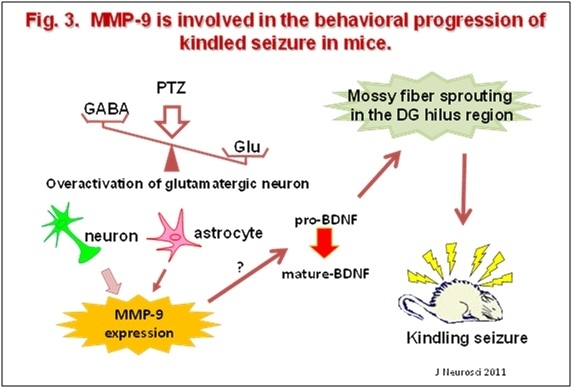 kindling results in a permanent state of seizure susceptibility, which may manifest as spontaneous epileptiform seizures. Kindling has recently been shown to induce a variety of permanent structural changes in the brain, including sprouting of the mossy fiber pathway that originates from hippocampal dentate gyrus granule cells and neuronal loss in the hippocampus. Using a pentylenetetrazole (PTZ)-induced kindling model in mice, we have been exploring the neuronal mechanism for seizure susceptibility leading to variety of permanent structural changes (Fig. 3).

(3) Basic mechanisms of learning/memory and other brain functions

Recognition memory is a fundamental facet of ability to remember, and an integral component of the class of memory lost in amnesia. The ability to discriminate familiar from novel stimuli is supported by this form of memory and is widely used as an assay in animals. Recent work highlights a major role in recognition memory for the perirhinal cortex because lesions or transient inactivation of perirhinal cortex consistently disrupt performance on familiarity discrimination tasks with object in both primates and rats. We have previously demonstrated that the activation of ERK1/2 following stimulation of dopamine D1 receptors in the prefrontal cortex is necessary for the protein synthesis-dependent long-term retention of recognition memory. Now, we focus on the possible interaction between dopamine and glutamate systems in protein synthesis-dependent long-term retention of recognition memory. Furthermore, we look for target genes of the dopamine D1 receptor-ERK1/2 signaling which are responsible for long-term recognition memory.
It has been widely believed that the synaptic plasticity in hippocampal neurons is related to the formation of various memories. Synaptic plasticity refers to the ability of synapses to vary their efficacy of chemical or electrical transmission over time in response to activities. Regulation of synaptic transmission and strength may be mediated by several events including changes in expression of synaptic surface receptors and neurotransmitters, altered neurite conductance, receptor subunit phosphorylation, postsynaptic calcium release and cytoskeletal remodeling. Neurotrophins are also considered powerful molecular mediators in synaptic plasticity. For example, brain-derived neurotrophic factor (BDNF) as well as its receptor TrkB have emerged as key molecules in the neurobiological mechanisms related to learning and memory. TrkB is known to activate Ras/extracellular signal-regulated kinase (ERK), phospholipase C-? (PLC-?) pathways and phosphatidylinositol 3-kinase (PI3-K)/Akt. Serine/threonine kinase Akt has been linked to brain development, ageing, and neurodegenerative and psychiatric disorders via the phosphorylation of a wide variety of its substrates. 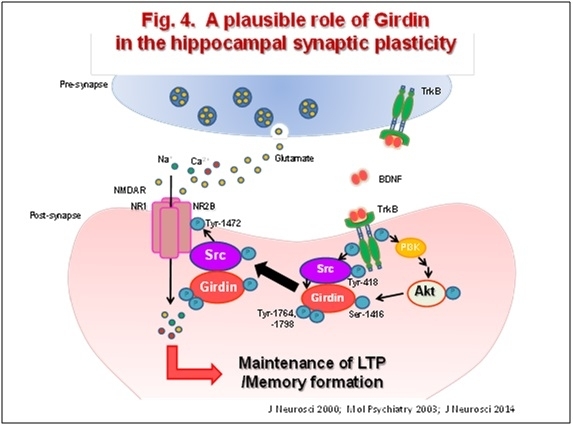 Girdin (also known as APE, GIV, HkRP1) has been identified as an actin-binding Akt substrate that has been reported to regulate migration of various cells. We have recently demonstrated that Girdin S1416 was phosphorylated in an activity-dependent manner, and this phosphorylation was essential for spine morphogenesis, maintenance of hippocampal LTP and memory formation. Furthermore, Girdin interacts with Src and NR2B subunit of NMDA receptors, leading to phosphorylation of the NR2B subunit and NMDA receptor activation. Our findings suggest that activity-dependent Girdin phosphorylation at S1416 induced by Akt is crucial for NMDA receptor activation associated with neuronal plasticity underlying hippocampal memory formation (Fig. 4).

The residency programs prepare pharmacists to be skilled clinical practitioners, researchers and educators. We offer both Postgraduate Year 1 (PGY1) and Postgraduate Year 2 (PGY2) pharmacy practice residency programs in the following settings:
PGY1: Basic pharmacotherapy program (3 out of 22 wards, each for 3 months) under the supervision by experienced clinical pharmacists.
PGY2: Advanced Pharmacotherapy, Oncology, NST or ICT program under the supervision by experienced clinical pharmacists with JSHPCS/JSHP certified Pharmacy Specialty.

To improve the adherence to and knowledge about pharmacotherapy in outpatients and to maximize the efficacy and minimize the adverse drug events, the first pharmacist-managed clinic (PMC) in Japan was established for anticoagulation therapy at Nagoya University Hospital in 2000. We now operate 7 PMCs at NUH, such as for anticoagulation therapy, asthma/chronic obstructive pulmonary disease (COPD), donepezil outpatient consultation service (DOCS), palliative care, chronic kidney disease, molecular-targeted drugs, and continuous ambulatory peritoneal dialysis. Some of them are run in collaboration with schools of pharmacy. A PMC for DOCS is an example of such hospital pharmacist/faculty pharmacist collaboration. The DOCS provides pharmaceutical education and counseling about the pathophysiology of Alzheimer's disease and drug therapy with donepezil and other drugs to outpatients and their family members.

We conduct a large variety of clinical and basic researches to provide better pharmaceutical care, in collaboration with clinical departments at NUH. Those include human pharmacokinetics in specific subpopulations such as infants, aged patients or patients with liver/kidney dysfunction, pharmacogenetics, cross-sectional pre- to post-intervention studies of patient education and counseling by pharmacists, retrospective factor analyses for better response/adverse drug reactions, and the basic researches in animal models to elucidate the mechanism of actions of therapeutic drugs.

Alzheimer's disease and other neurodegenerative disorders

Basic mechanisms of learning/memory and other brain functions